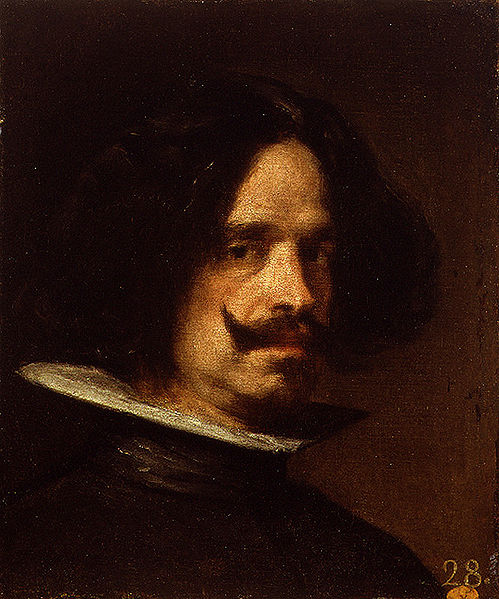 Welcome to my Blog and thank you for calling in. My aim here is to give you, my reader, an insight into my novel, The Harpist of Madrid. I will tell you about the characters, how they know each other, why I wrote the book and how I researched it. I hope this whets your appetite and are inspired to read it!

As you will see from the list of characters I posted some time ago, Diego Velazquez, one of the most talented and famous painters of all time, features in my novel. He and Juan Hidalgo, the main character of the novel, become great friends and so do their wives. They must have known each other as they were contemporaries in the court of King Philip IV who was a great supporter of art and music. Diego Velazquez was born in Seville early on 6 June 1599 and baptised later that day in the church of St Peter, Seville. He was the son of Juan Rodriguez de Silva, and Jeronima Velazquez, both native Sevillians who were married in St Peter’s in December 1598. His parents were keen to give him a good education and as a consequence he studied philosophy and languages. He showed an early talent for art and studied painting in the studio of Francisco de Herrera, a dynamic artist who developed his own particular style, ignoring convention. At the age of twelve, Velazquez began to study under Francisco de Pacheco, also a Seville artist. Pacheco was an enormous influence on the young aspiring artist and taught him not only brush stroking techniques and perspective but helped to develop his interest in the wider arts and literature.

By 1620 Velazquez had become a talented and recognised artist. On 18 April 1618 he married Juana Pacheco, his teacher’s daughter, who bore him two daughters, Francisca and Ignacia de Silva y Velazquez. The latter died in early childhood but Francisca went on to marry Juan Bautista Martinez del Mazo, also a well known artist. The service was in August 23 1633, at the church of Santiago in Madrid. Among their offspring were Ines del Mazo and Baltaser del Mazo, both of whom are characters in The Harpist of Madrid. Juana and Francisca de Abaunza, Juan Hidalgo’s wife, are good friends in The Harpist of Madrid.

Painter for the king

In the April of 1622 Velazquez travelled to Madrid with letters of introduction to Don Juan de Fonseca, chaplain to Philip IV. Evidently, Velazquez’s aim, apart from wanting to see the paintings in the king’s collection in Escorial, was to paint the king and queen but clearly something went wrong and, having merely painted a portrait of Luis de Gongora, the famous poet, he returned to Seville. His luck changed rapidly as in December 1622, Rodrigo de Villandrando, one of the royal portrait painters died, therefore creating a vacancy in the lower ranks of the court artists. Velazquez had impressed Fonseca, perhaps by his striking, self-assureded portrait of Gongora. It was thus Fonseca who, acting behalf of the Count Duke Olivares, a person always keen to promote the interests of fellow Sevillians, summoned Velazquez to the palace.

The king was impressed by a bust portrait Diego painted of His Majesty. So it wasn’t long before Velazquez had moved his family to Madrid, at the king’s expense, and was painting in the royal court at a monthly salary of 20 ducats, plus his lodgings, medical expenses and a commission for each of his paintings.

Having just painted Los Borrachos (The Drunks) at the king’s expense of a huge 100 ducats, in 1629 he went to Italy for eighteen months. No one is certain why he was accompanied by Ambrosio Spinola, the king’s brilliant general. He was famous, among numerous other triumphs, for the recapture of Breda from the Dutch. In The Harpist of Madrid, the reason why Spinola went with Diego was to send the king information about military forces in Italy. Despite the king’s sending him to Italy, not much is known about the journey there, whom he met, where he stayed, etc. Juana did not it seems accompany him and there are claims that he enjoyed the favours of a mistress while there. What is well documented is that Spinola died while on this journey.

On his return to Madrid, Diego Velazquez entered one of his most creative and productive phases. He launched into painting many of his renown royal portraits, not only of his main patron, King Philip IV, but also of the Infante Balthasar Carlos, heir to the Spanish throne. He also produced several portraits of the Count Duke, his most significant and famous sponsor. He became a great friend of the king and accompanied him on several visits, in particular to Aragon in 1642 and 1644. He also painted several portraits of the king’s first wife, Elizabeth of Bourbon, the one of 1632 in the most spectacular of dresses where she is holding a grey fan.

It was during this period that Velazquez painted many portraits of others in the king’s court, including soldiers, statesmen, churchmen and not least a not particularly fattering portrait of Francisco de Quevedo, the cantankerous poet who became Philip IV’s private secretary. This portrait hangs in Apsley House, the former home of the Duke of Wellington, known also as ‘Number One, London’. Some of the most sensitive portraits of this time are of dwarfs who worked in the royal court as entertainers and for whom the king held great respect.

In 1649, he embarked on his second visit to Italy, accompanied by his servant and student, Juan de Pareja, whom he portrayed in one of his most powerful depictions of a commoner. The king sent him to Italy, again without Juana, with the apparent aim of acquiring a range of Italian masterpieces in oils and in sculpture. In The Harpist, he has other motives. Velazquez engaged himself in painting several other works while there. He met Pope Innocent X and portrayed him in one of the most brutal pictures he produced. Despite its alarming severity, the Pope quite liked the picture and had it hung in one of his waiting rooms. Several copies of it were made, including one by  Diego himself. During this visit he bought pictures by Titian, Tintoretto and Veronese, in particular, Veronese’s The Death of Procris and his Venus and Mars. These amazing pictures inspired Juan Hidalgo de Polanco and Calderon de la Barca to use their subjects as the basis for the first two operas written in Spain.

Within a month or so of returning from Italy, Philip IV promoted Velazquez to Grand Chamberlain of the Palace. While there were doubtless others better qualified, the king decided to the irritation of many that Diego would be offered the post, along with further responsibility as Supervisor of Palace Works. In the post of Grand Chamberlain, Velazquez became intimately involved in the arrangements for the signing of the Peace of the Pyrenees and in those for the marriage on the Island of Pheasants in the River Bidasoa for the wedding of the king’s daughter, the Infanta Maria Teresa, to Louis XIV of France. Not only did Diego have to manage the incredible complexity of these arrangements but he had to comfort the king who cried uncontrollably while giving away his treasured daughter.

It was during this period that he managed to find the time and energy to paint a number of portraits of Queen Mariana, Philip IV’s second wife and to paint Las Meninas (The Maids of Honour), one of his most puzzling but brilliant works. The five year old Infanta Margaret Teresa, Queen Mariana’s oldest daughter appears to be the subject, but only because of her prominent position in the painting with the Meninas attending to her. But the maids have almost equal importance, along with the two female dwarfs and the portrait of Velazquez himself. There have been many voices of interpretation but to me the king acknowledges in this work, surely his commission, a kind of equality between his servants and his own family, a point apparently confirmed by his and his new queen’s appearance in the background as a reflection in a mirror.

One of Velazquez’s most controversial paintings is Venus del espejo (Venus in front of her mirror), painted around 1644 – 1648, also known as The Rokeby Venus. This enigmatic nude could well have attracted the attention of the Spanish Inquisition had Velazquez not worked in the employment of the king. Had Diego followed the laws of reflection, the mirror Cupid holds would show an altogether different part of Venus’s beautiful anatomy, not her unprepossessing face. The work was commissioned by Gaspar de Haro and probably painted in 1648 before his second visit to Italy. The model is probably the same woman as the subject of Sibyl with Tabula Rasa which he also painted around that time. The Sibyl adorns the cover of my second novel, the Emerald of Burgos.

His duties as Grand Chamberlain and Supervisor of Palace Works took their toll on Velazquez to the extent that on his return on 26 June 1660 from the wedding of Maria Teresa and Louis XIV on the border of Spain and France he fell ill with a fever from which he never recovered. He died on 6 August 1660 and was buried in the church of Juan Bautista, in Madrid. His wife died only a matter of days later and is buried with him. Unfortunately the church was destroyed by the French in 1811 and the whereabouts of his remains are unknown.

One thought on “Diego Velazquez”

Now we are slowly and probably coming out of this corona virus crisis, I thought I would write a series of more frequent and more regular blogs, based on my Instagram feeds. This will be the first! This is a nice old Cadillac de Ville we saw at the Stony Stratford Car show on Boxing Day. […]

As  you know, I’m in the middle of writing a novel about Ethel Smyth, one of our most famous composers of the late nineteenth and early twentieth century. I discovered that she went on a trip with The Empress Eugenie, the widow of Napoleon III, who became a good friend of Ethel’s after The Empress moved to Farnborough. […]

The loves of Miss Smyth

Hello everyone and welcome back to my site. Or welcome to anyone visiting for the first time! In my previous post, I published a draft of the draft of the first chapter of my new novel. The story is about Ethel Smyth, a brilliant, almost forgotten composer of the eighteenth and nineteenth century. She wrote many  incredible works […]

It’s the story of Ethel Smyth, one of the most brilliant British composers of the 19th/20th Centuries. I’m not sure what the title will be so I’ll miss it out for now. Any comments, more than gratefully received! Apologies for any typos or other errors. It’s still a first draft! More chapters will follow!   […]

I’ll be at WHSmith’s flagship store in Wimbledon Centre Court today from 11 am to 4 pm. There’s a special deal when you buy both ‘Return to Madrid’ AND ‘Expulsion’. I’d just love to see you there, if only to say ‘Hello’!

Buy the Harpist of Madrid